Noud van Brunschot, Mechanical Design Engineer and CAD wizard at DM Wheel Systems has been a mentor in the FIRST® Robotics Competition since 2013, when he was a student at Fontys Hogeschool.

Set up in 1989 by Dean Kamen, inventor of the Segway, FIRST stands for Inspiration and Recognition of Science and Technology, and is the world’s leading youth-serving nonprofit with the aim of improving the profile of STEM subjects. FIRST has now evolved into a global movement, preparing kids to solve the world’s greatest problems by inspiring innovation and leadership through hands-on robotics challenges for students aged 14-18.
Two other competitions in the programme are aimed at primary school level and are very popular in Dutch and other European primary schools. The Programmes are known as FIRST Lego League for ages 6-10 and FIRST Tech Challenge for ages 12-18. “It’s just the FIRST Robotics Competition the has not yet found a solid footing in the Netherlands or Europe” says Noud. He hopes this will change: “It would be great to have a European regional competition as the costs involved in competing annually in America can be a barrier for some participants.”

During his second year of a Mechanical Design Engineering Degree, Noud became part of a team that introduced the American-based STEM (science, technology, engineering, and math) competition to students in the Netherlands.

“I’ve always liked working with technology, and I really like being part of the development process, particularly helping young people develop into innovative, solutions-focussed thinkers. That is very satisfying to see. The interaction with the students is a lot of fun as well”.

Simply named 4481, Noud’s team is one of four Dutch teams and 15 European teams currently competing in a programme where 90% of the teams are American. Noud has been to the USA seven times to compete. Last year, team 4481 won the World Cup at a spectacular event in Detroit in which more than 40,000 people took part.

“It’s a top-sport” says Noud, “...like a Superbowl for geeks. The energy and excitement of the kids, being part of a World-Cup winning team, that moment when everything fall into place... it was fantastic”. 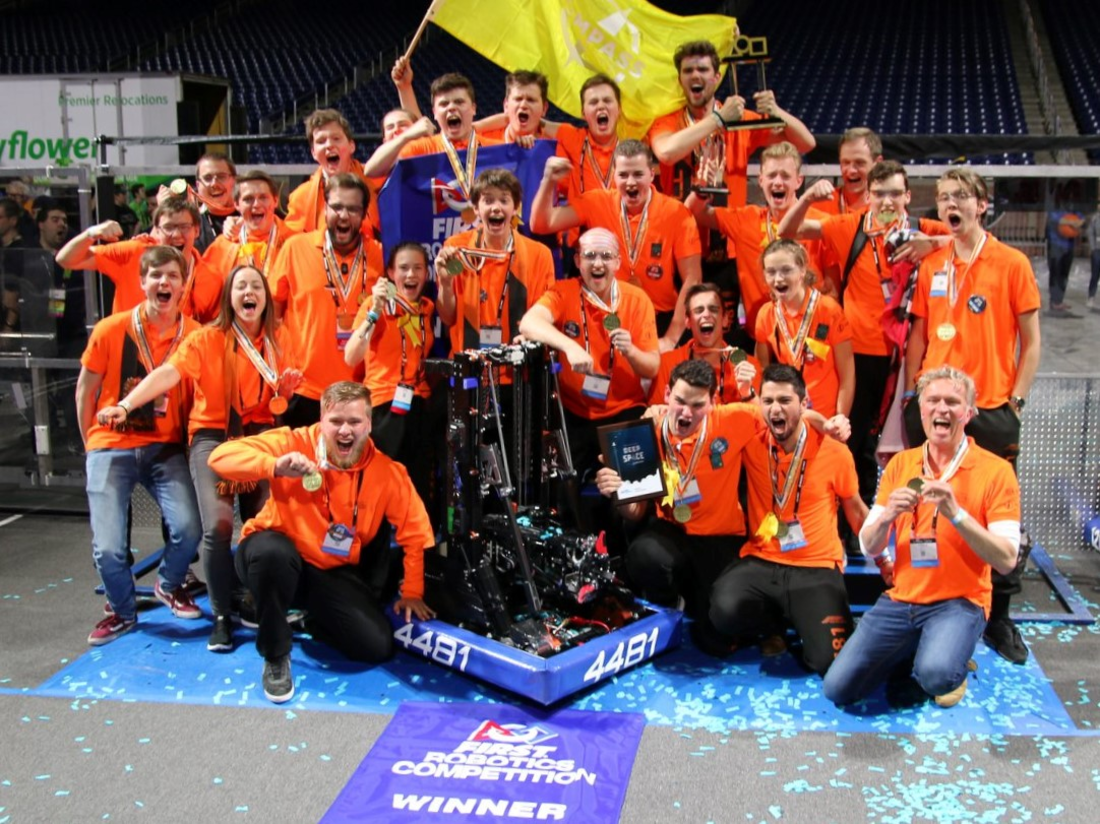 Designing, prototyping, testing, refining, building and programming a 60kg robot is a lot of work and the 6 week timeline is intense. Everything has to happen quickly and accurately.
The team is currently in week 4 of the cnstruction phase of the development process. Weekend competitions will be held in Los Angeles from 27 February, forming the  preliminary rounds for the World Cup in Detroit this coming April. “This year we will keep a record of our progress in a blog with lots of videos and updates, which we also provide on our YouTube channel”.

Four members from Team 4481 recently visited DM Wheel Systems to see how we could work together to realise a winning entry for this year’s competition, which focuses on a creating a robot that collects and shoots balls into a goal. Noud was on hand to show the students around our factory.
“Encouraging and facilitating collaboration between the students is a very important part of my mentoring role and also an important part of my work at DM Wheel Systems. Co-engineering is a collaborative problem-solving process that can produce world class results. The Dutch are known for it, and our team of young people from Eindhoven proved it again last year at the FIRST Robotics World Cup Competition.
During their visit, the students were keen to explore how DM Wheel Systems could help them by producing the axles, shafts and wheels needed to complete their robot. With Noud’s help, the students will generate and supply the STEP files required to program our machines, including a CNC lathe with a robot arm loader. Robots being used to make a robot! It seems process and product have come full circle.
Manufacturing on demand is our speciality and we are standing-by to receive orders from our enthusiastic young design team. Bring it on!

Home - About us - News - Inspiring Solutions for Robotics Students

Select up to three products and compare their properties.